The one road to Milford House, Route 8, began as a trail that followed the ribbon of lakes through this wilderness home of the Mi’kmaq. By the mid 1800s, this route connected travellers from the Annapolis Valley to the Atlantic Ocean. Settlers arrived on horseback to claim land grants or to work in the numerous lumber mills along the many waterways. Abraham Thomas, moved here from Queens County with his wife Mary, and young son, Adelbert (Del). Their first home was a small cabin which he had built around 1860 with logs from his mill, then moved to a spot alongside the Thomas Brook — close to the eventual site of the Milford House. This early home was the foundation for what was to become a successful innkeeping business. 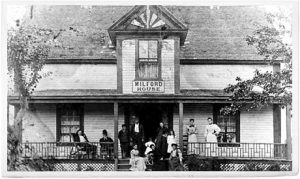 The Thomas family (surrounded by guests) standing on top of Milford House steps (circa 1898). Left to right: young Ralph Thomas, father Adelbert (Del) Thomas, sister Goldie, mother Annie and sister Dora.
The Thomas home was well situated between Annapolis Royal and Caledonia. This main route became a scheduled stop for the stage coach and eventually workers traveling to and from the area. Drivers would stop here to change horses and have a meal before heading on their way. With more workers arriving to work in the mills, and limited places for them to stay, the Thomas home began to offer food and lodging. Abraham died in 1875, but his wife and 12 year old son Del continued to run the farm and this growing family business. 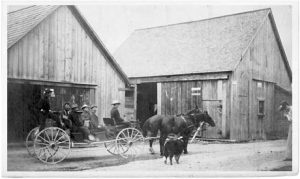 The reputation of Milford House as a prime destination for sportsmen and their families came to fruition when Del married Annie Dukeshire. Together they put their home and community on the map. In doing so, they made a major impact on the tourism industry in the southwestern region of Nova Scotia. 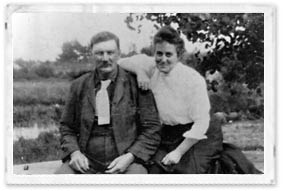 Del and Annie Thomas created a legendary partnership. Their popularity as innkeepers was twofold. Del was skilled on the lakes and in the woods, a great caretaker of the travelers and sportsmen who relied on his expertise, and a shrewd businessman who recognized the value of the “tourist” trade. Annie, the ever gracious hostess and good cook, turned their modest farmhouse into a beautiful “Summer Hotel,” with a well-appointed, spacious dining room. Many guests recount wonderful anecdotes of her daily afternoon teas on the front verandah. Their reputations quickly extended beyond the area, and eventually throughout the eastern United States.

THE REAL BEGINNING OF MILFORD HOUSE

The beginning of Milford House as a popular retreat is believed to have its roots in the following story. A storm and blocked roads forced a group of travelers to seek shelter at the Thomas home for a few days. These travelers were avid American sportsmen. They convinced Del Thomas to build a log cabin on the lake behind the house so they might have a place to stay when they returned. Del responded to their request. By 1902, two log cabins were available for guests to use. However, until the 1920s, most stayed in the “Big House.”

This Victorian-style country farmhouse underwent at least four enlargements, eventually boasting eight bedrooms for the Thomas family and guests. It was often called the “Halfway House” or the Thomas Hotel before ultimately becoming known as the Milford House in the early 1900s. Most of the lakeside cabins were built from the mid 1920s until the thirties. An Annex was constructed near the road to accommodate the busy summer and fall seasons.

Early promotions encouraged families to come and “share the joys of camping here with perfect comfort since there is practically no hard work to be done and the beds are warm and good.” (Dr. Eddie Breck, longtime guest and main character from The Tent Dwellers). 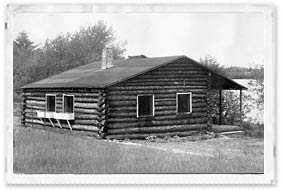 These lakeside cabins became the summer residences for the families of American sportsmen who headed out to the woods and lakes for ten days or more at a time. Del and Annie, provided regular employment for most in the area. Their job was to attend to all the needs of these visitors. Such strong bonds were established between the guests, the guides and the local workers that friendships lasted from one generation to the next. Many continue to this day. Guests befriended many in the community. Some even became like family.

These early sportsmen and naturalists were Milford’s best promoters. They spread the word on their return to the States, often by submitting articles to various publications. An annual migration of Americans was well established by the 1920s and represented the bulk of guests to Milford House until the 1960s and early 1970s. At this time, more Maritimers were re-discovering what was right on their doorstep.

Without electricity or indoor plumbing, the care and comfort of guests was the job of dedicated young girls and boys. Blocks of ice filled the ice boxes, kerosene lamps were cleaned and filled daily (until the 1960s), cabin linens and clothes were washed, starched and ironed. Wood was delivered, fires lit. Hot running water was still considered a recent addition in the 1970s. None of these conditions deterred these avid sportsmen or their families. They arrived with an entourage often for two to three months. They clearly loved this unspoiled wilderness setting.

A WILDERNESS RETREAT FOR MORE THAN A CENTURY!

Other small lodges such as the “Kedgemakooge Rod and Gun Club” on Lake Kejimkujik, was also very popular. Guests travelling with Guides beyond the Milford Lakes would go on extended back country trips into Kejimkujik. The “Kedji” lodge became a base camp, but once the “Rod and Gun Club” closed, Milford House gained the distinction as the only establishment of its kind to be in continuous operation for more than one hundred years in Nova Scotia.

On September 7, 2000, a devastating fire engulfed the lodge. Guests and local residents rallied and full reconstruction was completed in record time. Milford House was open for business as usual the following summer!

Four generations of Thomases operated this innkeeping business for more than a century until the deaths of Ralph Thomas in 1968, followed soon after by his wife Vera. Their only child, Joan (Thomas) King and her husband Hadley King, Jr. were unable to carry on the family business beyond the 1968 season. That summer, Warren “Bud” Miller, who was originally hired by Del Thomas in 1942 to assist Annie with her gardens, was asked to help out with staff and guests until Milford’s future was determined.

THE SPIRIT OF MILFORD HOUSE LIVES

On Following the deaths of Ralph and Vera, the continued existence of Milford House was very tenuous. Long-time guest, Frederick Geier of Cincinnati, purchased the Milford House in 1969. He gathered together a small group of American guests, many of whom had family ties to Milford since the 1920s. They became the first shareholders of the new corporation called Milford House Properties Limited which continues to be dedicated to Milford’s traditions and ongoing success.

In 1969, Bud Miller was hired as Milford’s first General Manager. Through his many years of “internship” with Del Thomas, and then Ralph and Vera, he had performed almost every task there was to do. His reputation with the staff was good, he was popular with the guests and understood their needs. Along with his wife Margaret, and their three children Wendy, Linda and Warren, they became the link between the familiar traditions and the changes that would follow. Until his retirement more than 45 years later in 1989, both Bud and Margaret were dedicated in their commitment to welcoming guests new and old to Milford House. Sadly, Bud died in the fall of 2005. 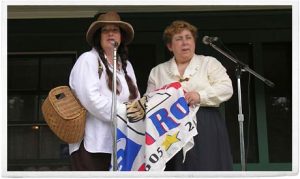 Re-enactment and special Book Launching of Through the Woods: A Collected History and Reflection of the Milford Area & Communities, front porch of Milford House, August 2006.

An extensive history of Milford House and the surrounding area from the early 1900s to the present day is chronicled in a series of binders in the lodge. Through the Woods, A Collected History and Reflection of the Milford Area & Communities, published by the Milford and Area History Group (2005) is an excellent source of oral history and anecdotes of the early settlement. A reprint of The Tent Dwellers, by Albert Bigelow Paine, is also available for sale. 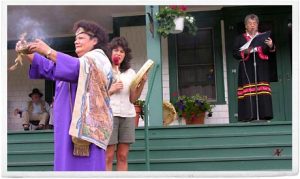 Special sweetgrass ceremony performed by Bear River Mi’kmaq Elder Agnes Potter and her two daughters at the Re-enactment and Book Launching of Through the Woods, August 2006.